Fire sprinklers have been used in commercial properties for over 200 years – the world's first modern recognizable sprinkler system was installed in the Theatre Royal, Drury Lane in 1812. Their primary use was to protect the buildings in which they were installed, but there is growing evidence to suggest that fire sprinklers save more lives (of both occupants and fire service staff), compared to standard smoke alarms and other passive fire detection systems.

There is now a growing consensus that fire sprinklers installed within residential and domestic properties, especially those housing more vulnerable occupants, or high-rise properties, are a cost-effective method of reducing UK’s fire-related death toll.

It is often, but certainly not always, the most vulnerable members of society – the very young, the very old, the disabled, the infirm and those with drug and alcohol dependencies – that die as a result of fire.

Most of the existing legislation revolves around new and refurbished properties, but industry studies have demonstrated that the retrofitting of fire sprinklers is possible with both disruption and cost being significantly lower than many people would expect.

We have summarised below a summary of current legislation across Great Britain (which many people think would be the same across countries, but is certainly not) and our product range for this sector.

The Welsh Assembly lead by some way in the UK on Residential and Domestic Sprinklers – wide-ranging rules were made law in 2013 that did not, despite some concerns at the time, lead to an end to housebuilding in the country. In fact, fire sprinklers have been embraced.

The Domestic Fire Safety (Wales) Regulations 2013 required all new and refurbished residential care homes, homes in multiple occupation and hostels (as well as certain other types of premises) to be fitted with an approved fire suppression system.

Since 2016 all new and converted single family dwellings, including houses and flats, are also required to be protected by approved fire sprinkler systems. This requirement is ahead of both Scotland and England.

Wales is now coming under pressure by petition P-05-858 (‘Fire Sprinklers are for life, not a fast buck!’) to introduce a requirement that fire sprinklers must only be designed and installed by competent contractors (under third party certification) – after all, the same requirements apply to electrical and gas installations, so why not for something else which is safety critical?

Scotland has had a requirement for fire sprinklers in certain domestic buildings since 2005, and in 2019 is on the verge of taking further steps.

All new residential care homes (as a consequence of the Rosepark tragedy where 14 died in 2004), sheltered housing and high rise domestic accommodation above 18 metres high have to be fitted with residential fire sprinklers. Sprinklers are required in all covered shopping centres and new schools in Scotland should (note the word ‘should’ in this case) also be fitted with a sprinkler system.

It is worthy of note that Scotland managed to pass legislation for fire sprinklers in new care homes within months of the Rosepark Care Home incident, although retrofitting is still under discussion.

Despite not being law, certain local authorities (Angus, Fife, Dundee as examples) already require fire sprinklers to be installed in all of their new housing stock.

Scotland is also on the verge (consultation published July 2018) of taking further steps, being on the brink of further legislation to require sprinklers in all new social housing, all new apartments and in all multiple occupation properties for 10 or more people. Work continues in some commercial areas, historic properties (prior to, but highlighted by Glasgow School of Art) and the retrofitting of care homes.

English progression in respect of fire sprinkler installation is quite different, appears much softer although more complex, and is split across several pieces of legislation where there are also conflicts in some areas. Approved Document B of the Building Regulations, the Building Act 1984, Building Bulletin 100 are the main documents containing relevant sections.

In England, there is only a requirement for fire sprinklers in new high-rise building over 30 metres (10 floors) whereas in Scotland this is 18 metres (6 floors).

Despite this, several local authorities have taken it upon themselves to address matters without legislation – in Manchester alone, many high-rise building are in the midst of being retrofitted with sprinklers as we speak.
More than unfortunately, it takes disasters such as Grenfell to ‘focus the mind’ on such matters, and Dame Judith Hackitt’s report will lead to wide-ranging reviews. In fact, the MHCLG published the ‘Technical Review of Approved Document B of the Building Regulations – A Call for Evidence’ in December 2018 – although this is likely to focus on high-rise flats, it will consider all other types of building.

It is clear to see that the ‘automatic fire suppression systems’ (i.e. fire sprinklers) message is getting through, for both life safety and building protection, but there is also growing concern within the industry that the issue of ‘competent contractors’ is addressed in parallel.

At the time of updating this page – June 2019 – we are two years on from Grenfell. Reports have been written, there are more to come, and moves are being made. But it’s staggering how slowly these things move.

The residential/domestic fire sprinkler market is growing in importance and size, therefore SEP offers a choice of two ranges of booster pump sets for this application to suit different applications and budgets – a highly cost-competitive range from Grundfos, and an additional range from Lowara. 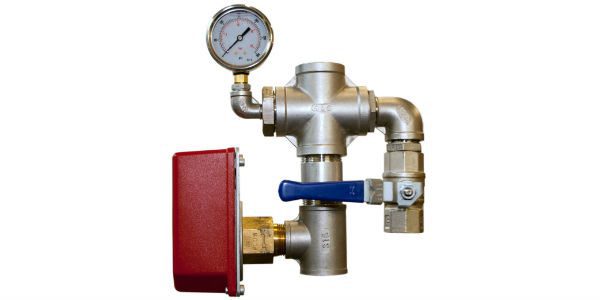 Following many customer requests, and after some time in product development, we are proud to have introduced a compact design residential riser assembly.

The unit was designed to be both smaller and cheaper than many units available; however, with inexpensive imports using flow switches which are not necessarily LPCB approved, our range is now generally used for special configuration and retro-fit applications.