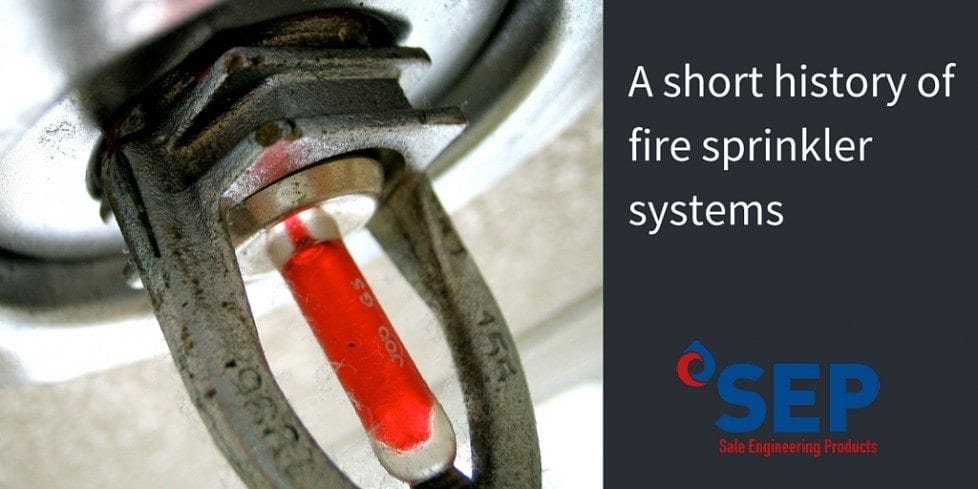 The fire sprinkler systems we know today date back around 200 years to what is often recognised as the world’s first recognised system installed in 1812 at the Theatre Royal in London’s Drury Lane.

The theatre’s architect, William Congreve, also patented his invention which comprised a cylindrical airtight water reservoir holding approximately 95,000 litre of water. A 250mm water main was routed to all different areas of the theatre and smaller pipes with a number of 13mm holes, branched off from the main distribution pipe. If a fire occurred these would spray the water into the theatre when the system operator activated it.

Although this is seen as the first “modern style” sprinkler system, Leonardo da Vinci is said to have designed a system a few hundred years earlier, that worked too well and when a fire broke out in his patron’s kitchen actually washed away most of the kitchen as well as putting out the fire.

Perforated pipe systems, although not automatic, were installed in many of the UK’s textile mills as the industrial revolution got going and these lasted until around 1885. We then move to the USA where Henry S Parmalee from Connecticut is seen as the inventor of the automatic sprinkler head although Phillip Pratt had filed a patent in 1872. Mr Parmalee took the Pratt invention, improved it and then installed a system in his own piano factory.

The baton was then picked up by Frederick Grinnell who made further improvements that led ultimately to the glass disc sprinkler system that is very similar to the units we currently use today. When enough heat reaches the disc, it will shatter and spray water into the space below. Each sprinkler head is therefore automatic and will operate independently of other heads.

The majority of significant changes since the middle of last century have not been to the heads themselves but to the locations in which they are installed. Their development was largely driven by commercial concerns but has since moved into protecting lives as well as property. Hence they are now more common in schools, residential care homes and hospitals.

There are also now several types of fire sprinklers system including wet pipe, dry pipe and those that use different types of spray to extinguish or suppress the fire. There will more on these in later articles.