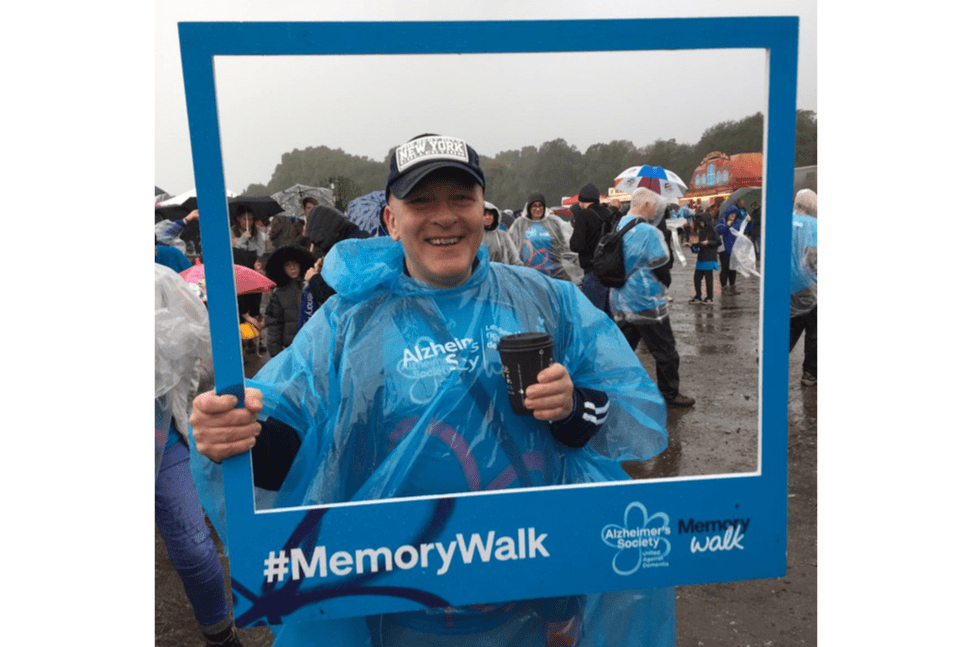 It was around 8 weeks before the wet and windy Saturday of 28th September 2019 that SEP workshop engineer (and Zone Guardian expert) Dave Tyers and his wife Tina decided that they would take part in something new.

Having seen an article for the Alzheimer’s Society Manchester Memory Walk, and both having had parents affected by the scourge of Dementia and Alzheimer’s, they decided to join others and try to raise some much needed funds for the fight against what WHO experts say is a “rapidly growing public health problem” .

Dave’s father, Frank, passed away in 2013 aged 84, after suffering for several years with both Alzheimer’s and Vascular Dementia. For much of this time, Dave’s mother, herself in her 80s, was his main carer. Dave’s wife Tina’s grandmother, Winnifred, was also badly affected in later life. Everyone in the SEP office knows several people affected, both family and friends, and it’s almost certain that you do too.

On the day, complete with Met Office weather warnings for wind and rain, after waiting around for three hours for organisers to risk-assess the situation, everyone was frustrated and disappointed that – for reasons of safety and risk to walkers – the event was to be abandoned. However, Dave, Tina and many other people present decided that they’d brave the rain, mud and puddles and go ahead in any case!

Dave commented “Dementia research is just one of many great causes that needs more funding. Life is hard enough as you get older without suffering from, or having to care for, someone with a severe health problem or disease. Anything that any of us can do to help this growing problem is worthwhile. It’s not something we’ve done before, but despite this year’s problems we’re certainly up for it again next time!”.

Dave and Tina, grateful for donations from their friends, and colleagues at SEP, raised a total sum of £370 for Alzheimer’s Society, so well done to them.

If you would like more information, or if you feel you can donate, then please see https://www.alzheimers.org.uk/